Skip to content
HomePOST #37: THE SCREEN TO THE WORLD 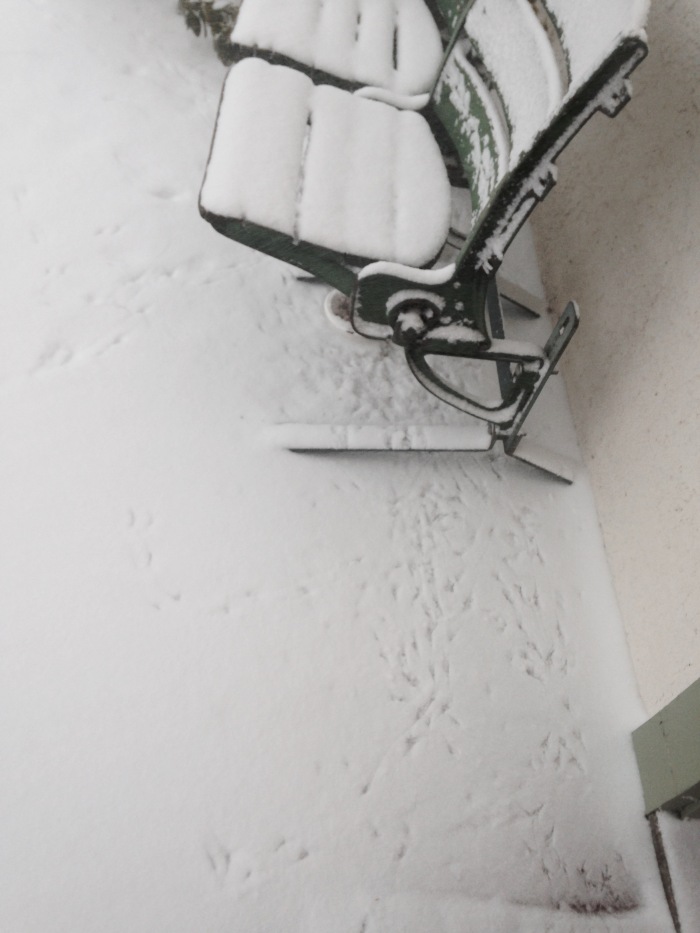 It’s an assault from within and without.

We’re urged to stay in. Of course we’ll stay in.

TV weathermen, shirtsleeves rolled, buoyantly flapping their arms in the general direction of indecipherable, crayola bright maps are glorying that–at last!– the camera lenses settle on them for more than a heartbeat.

The men match their ties to the seasons. The women flex their biceps in sleeveless dresses and earnestly intone about wind chill factors and whiteout conditions. No mistake about it — everyone’s teeth are white as snow.

After 20 minutes or so of Mensa worthy graphics and cozy chats with regular people about soups and shoveling and sock liners, I turn off the set.

Instead, I look out the window.

It’s just before dawn. It’s still quite dark. The street lamps are glowing yellow and in that light I can just see the snow swirling, each flying with the daring do and tenacity of a million little Eddie Rickenbackers engaged in a tiny mid-air dogfights. How wonderful then that each flake is destined not to crash, but to calmly descend to its proper place, one atop the other.

Unused to quiet at this ungodly hour I’m sure it should be silent. But that’s as foolish as Aristotle’s untested assertion that heavy objects fall faster then light ones. It took Galileo’s climb to the top of the Tower of Pisa with his to put that fallacy to rest. Because of course, all silence is full of sound.

I listen and there it is! A muscular wind that leaps from its corner at the sound of the bell then feints and punches like a prizefighter. Wait! And just then, it blows with the power of a thousand sneezes!

If you believe what you see in picture books, snow comes down straight from the sky, clouds billow like so much marshmallow fluff, and the sun is conveniently tucked in the upper right corner. Nice and neat and we’re done.

But this snow does not stay between the lines. As I watch the snow comes crazily from all angles, riding the curls of the wind as it moves across the lawn, and rattles down the empty street.

Our beloved little dogwood trembles alone on the front lawn, its branches splayed like disheveled hair on a pillowcase. It’s immobile unmoving, — um it’s a tree, after all—but I shudder. I’ve just remembered that the tree, and so much else out there, is alive too..

Just then a little chipping sparrow lights on the snow-covered bush in front of me. It looks about for a moment then shakes itself off before diving deep into the labyrinth of the knitted branches.

Smart little thing! It’s found a safe cavern, as snug as the bed sheet fort my boys would construct with chairs and pillows under the kitchen table. Maybe it has stashed some seeds or crumbs there, just as my boys once hoarded bags of Rold Gold™pretzels and Apple & Eve™ juice boxes.

How many creatures then are bravely burrowed just out of sight? There is no Accuweather Minutecast ® to tell them when it all ends. They snuggle, they dream, they wait. They do know how to wait.

Can they feel the end of a storm? If we try, can we?

Instead we obsessively watch our glowing screens, our nervousness increasing with each 8-minute update, like anxious readers halfway through a book who impatiently jump to the last page to find out the ending.

If we didn’t watch would we fear for the end of the world? Or would we burrow in, believing as hard as we could that it would have to stop sometime? And when it did stop, we once again would dig our way out.

Either way we wait. We are not in charge. When was the last time I sat still for this long?

I look out again. The light has increased so the whiteness of the sky blends with the billows of the snow. The snow is blowing sideways. I didn’t know that was possible. I bend down to check my compass. It’s coming from the east.

I have no idea what time it is. But I haven’t moved from my window. Snowflake Bentley photographed thousands of snowflakes, each one of them ephemeral, beautiful and different from every other. I can see them piling atop each other, the piles rising and rising.

I know there are mathematical formulas to determine the exact amount of snowfall per hour. But I don’t care.  Let me leave that for others. But I wonder if my lifelong aversion to math relates to the truth that I really don’t want to control the world and it’s forces?

What I want very much is to be immersed in the world. To feel it. To respond to it. To respect it.

We are urged to stay in. Of course we’ll stay in.

Just for a moment I do. The snow, bolstered by the wind, peppers my face. It smears my glasses. It is so very cold. My outside breath feels thick, almost tangible. I can see it.

But I smile. Because I can actually feel it.