I’ve long been envious of the verbal snapshots that the great diarists of the past such as Samuel Pepys or Winston Churchill. With a key observation, a pithy phrase, a few jotted words, they punctuated their lives in ink. I’ve always been amazed at how terse many of these daily observations are. Not verbose. Not show offy. Just a scattering of words that serve as bread-crumbed path to memory.

I was thinking about this, thinking about so many things really, as I drove drone-like along the highway, having once again helped set the year in motion, having sent everyone off to school once again. I miss them. I want so much to remember. I’m frightened that I won’t remember. I fret.

But remembering should be easy, shouldn’t it? With the touch of a button I can snap off a dozen photos, with another swipe I can organize and categorize them. With a final fillip I can even swirl them into a Sundance quality montage. The funny thing is, I don’t do this. I don’t really want to.

September is always a pull up your socks kind of a month.   New shoes, new teachers, new ideas, new beginnings. Moving forward, there is always the pull of the past, the fear of forgetting where you came from, from what brought you to this point to get you where you’re going.

I’ve stopped trying to remember everything. That’s overwhelming, impossible. But there is another way. Memory for me has become kaleidoscopic, ever shifting, always responsive to another twist of the dial. I sieve my memories, washing away the dross. It’s true there are gaps. It’s true my thoughts often aren’t always linear. Instead my memories are responsive to where I am and to what I’m doing. They’re malleable. To crystallize them, freeze them wouldn’t work for me. Because for me, memory isn’t a trip to the past so much as a path to the present.

So while I do take and keep photographs of those I care for they’re not the first place I look when I want to stir memories. Instead I’ll conjure images that are for me far more evocative and powerful.

The swirling thoughts that are stirred bring all of these people closest to me vividly back once again. These images are my rubric, my guideposts. To think in images keeps memory alive, not pasted into a scrapbook. It’s a brave and thrilling thing to do. It’s worth it to give yourself the pleasure of crafting memory instead of grasping for it.

The great diarists left themselves a map to recreating memory. I try to do the same. What a gift, what a joy! Once again my mind returns to the magical Richard Jeffries who said in The Story of My Heart,

And that is just how I want to feel, how I hope everyone feels, as we once again sweep into the brace of September and onward to a sweet new year. 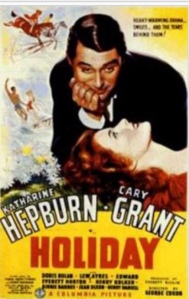 In keeping with my utterly indoorsy nature, I’ve found the best way to stay warm and content in the freezy cold during the holiday season. Beaches are lovely, but sausaged into a bathing suit I am not, ski slopes are inspiring but steep. I’ve been around a while. I know what I am doing. I am happiest and safest basking in the warm glow of the TV. It pays to be picky though. This year I went on holiday with the movie Holiday.

For any of you who aren’t familiar with this 1938 George Cukor directed gem, Holiday is one of the best pairings of Cary Grant and Katharine Hepburn. A quickie synopsis: Cary Grant (Johnny Case in the movie) plays a hardworking young man who meets and falls in love with a woman named Julia Seton, (NOT Katharine Hepburn) on his first ever vacation, is smitten, and immediately proposes. Once back in New York he’s invited to lunch and is stunned to discover that he’s about to marry into one of the wealthiest families in the city. His fiancée Julia, however, is determined to impress her austere and humorless father and propel Johnny into the stratosphere of the family business. It would appear this self-made man is about to hit the jackpot. But here’s the twist: Johnny Case, a man who has been working constantly he says “since he was ten years old” wishes to retire early and work late. He wants to enjoy life while he’s young. He’s amassed a small sum for this purpose. His fiancée is appalled. Luckily for him (and the movie) her sister Linda, played by Katharine Hepburn, is entranced.

Pleasures of watching Grant and Hepburn aside, I’ve nurtured what I thought was the central conceit of this movie–retire early and work late— for a lifetime, ever since first saw it when I was about 14. I mean really, how appealing to retire and enjoy life first and work later? Except that gung ho and hyped up even then, I didn’t do it. Immediately after college I hopped a plane to New York and shoe horned myself into a publishing career. Screeched to an about face to stay at home with my sons. Was grudgingly transformed into a PTA guru. Unexpectedly tripped into a teaching career. Cut forward many years. Here I am. Based on what I thought was the premise of this movie; I’ve been aggressively working through my youth and should be deeply unhappy. But most assuredly I am not.

Here is why. Let’s retell the story.

In college I studied what I loved best, majoring in art history, immersing myself in not just the beauty of the works, but seeing the world through the prism of artistic creation. When it was time, I took those visions, those viewpoints and made them work in the work world helping to create titles involving everything from science books to cookbooks, how-tos to children’s books. It was my choice to stop work and stay at home with my boys. I consider myself lucky to experience the joy of being invited to share rice crispie treats and juice boxes under the secluded sheets of a table fort.  I am proud of (sometimes) saying just the right words to make a roomful of tired and hungry 5th graders reach inside themselves to think things they’ve never thunk before.

So really. Have I been working the whole way through, or have I really been on holiday the whole time without even realizing it? Either way, why stop?

I get to be wrong here. In spite of my longstanding love for this movie, it’s not really about retiring early, working late at all. It’s about doing things that you love, if you are especially lucky, with the person or persons you love. Sometimes it’s about inventing and reinventing yourself if life’s path zigs where you expected it to zag. It’s about perspective.   It’s about finding a way to enjoy life.

An old friend once admonished me: “Do something kind for yourself every day.” Go on. Do it. Happy Holidays and Happy and Healthy New Year to all.